The theory behind the reactance modulator shown in Figure (a) is to add a phase-shifting network consisting of a series R and C. The modulator active device and the RC network are both in parallel with the resonant circuit of the carrier oscillator. The oscillated signal voltage that is present across the resonant tank circuit also appears across modulator and the series circuit of R and C. The coupling capacitor C4and the RF bypass capacitor C2can be any large value to allow near-zero reactance to the oscillator frequency; as such, they are removed from consideration in this analysis. 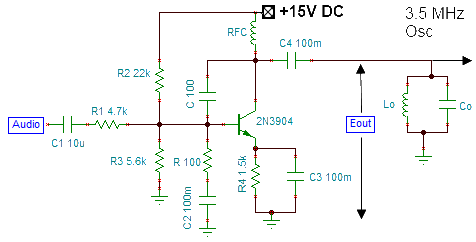 The capacitive reactance of C at the oscillator frequency is made five to ten times larger than the value of series resistance. In this case, the 100PF capacitor has 500Ω of reactance at 3.5 MHz. The value of R, then, is chosen as 100r. The RC circuit now appears to be purely capacitive. In a purely capacitive circuit, the current leads the voltage by 90°. Thus, the current through capacitor C leads the oscillator signal voltage across the capacitor by 90'. The same leading current flows through resistor R, where E and I are in phase, so the voltage across the resistor leads the oscillator signal voltage by 90°. The transistor collector current (Ic) is in phase with the base voltage (the voltage across R) so if ER leads Eosc by 90°, then I, also leads Eosc by 90°. The current through the transistor leads the voltage across the transistor by 90°, malting the circuit look like a capacitor. An audio signal applied to the base of the modulator causes a change in the collector current. The vector result of changing Ic relative to Eosc causes a change in the value of equivalent capacitance, which in turn causes a change in the oscillator frequency.