Controlled rectifiers, or converters, as they are generally called, are broadly classified into full-controlled and half-controlled types. The full controlled or two quadrant type uses SCRs as the rectifying devices. The DC current is unidirectional, but the DC voltage may have either polarity. With one polarity, the flow of power is from the AC source to the DC load this is called rectification. With reversal of the DC voltage by the load, the flow of power is from the DC source to the AC supply; this process is called inversion. In this article we will discuss half-wave controlled rectifiers.

With a Resistive Load

Figure 1(a) shows a half-wave controlled rectifier circuit with a resistive load. During the positive half-cycle of the supply voltage, the SCR is forward-biased and will conduct if a trigger is applied to the gate. If the SCR turns on at tω load current flows and the output voltage VO will be the same as the input voltage. At time t = π, the current falls natural to zero, since the SCR is reverse-biased. During the negative half-cycle, the SCR blocks the flow of current, and no voltage is applied to the load. The SCR stays off until the gate signal is applied again at (tO + 2π). The period from 0 to tO in Figure 1(b) represents the time in the positive half-cycle when the SCR is off. This angle (measured in degrees) is called the firing angle or delay angle (α). The SCR conducts from tO to π; this angle is called the conduction angle(θ).

VS = RMS value of the AC source voltage

Similarly, the average output current is 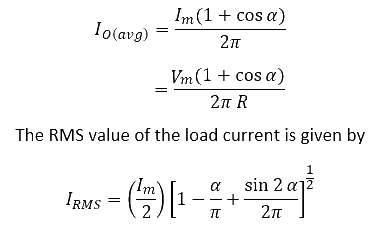 These equations tell us that the magnitude of the output voltage is controlled by the firing angle. Increasing α by firing the SCR later in the cycle lowers the voltage, and vice versa. The maximum output voltage, Vdo = Vm / π, occurs when α = 0O. This is the same voltage as for a half-wave diode circuit. Therefore, if the SCR is fired at α = 0O, the circuit acts like a diode rectifier.

The normal average voltage is 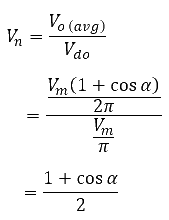 Vn as a function of α is known as the control characteristic of the rectifier and is shown in Figure 2.

With an Inductive (RL) load

A half-wave rectifier with a load consisting of R and L is shown in Figure 3(a). if the SCR is triggered at a firing angle of α, the load current increases slowly, since the inductance in the load forces the current to lag the voltage. The voltage across the load (VO) is positive, and the inductor is storing energy is reverse-biased. However, the energy stored in the magnetic field of the inductor is returned and maintains a forward-decaying current through the load. The current continues to flow until β (called the advance angle), when the SCR turns off.

The average load voltage is given by

With a Freewheeling Diode

To cut off the negative portion of the instantaneous output voltage and smooth the output current ripple, a freewheeling diode is used as shown in Figure 4. When the load voltage tends to reverse, the FWD becomes forward-biased and turns on. The SCR then becomes reverse-biased and turns off. Therefore, the current that was flowing from the source to the load through the SCR now freewheeling between the load and the diode.

Note that the current continues to flow in the load after the SCR is turned off, due to the energy stored in the inductor. The output voltage is the same as in a circuit with a resistive load. The average value of the output voltage is given again by equation 1.