We know that a body which absorbs all kind of radiation falling on it is called black body.

The ideal black body and its spectrum can be shown as.

For lasers the black body radiation is easily explained by the help of atom model and energy level diagram.

We know that in atom electrons moves in shells (orbits) around the nucleus while proton and neutron exist/occurs in nucleus. Electrons can move from one shell to another. When they want to move to shell with greater diameter, then they must gain or absorb an amount of energy equal to the increased energy required by the next shell from the outside source.

Since photon is the packet of energy. Therefore if photon comes from an outside source to the electron in shell and electron absorbs a photon, then electron moves to different shell because of its increased energy shown as by atom model. 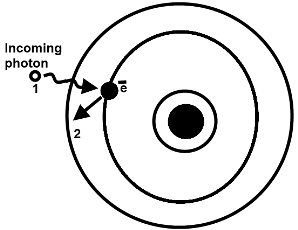 This process can be depicted graphically by energy level diagram as: 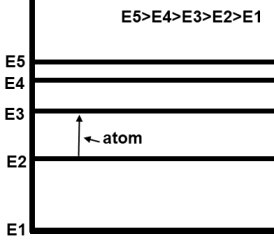 When electron in atom absorb energy from outside source then the extra energy condition of an atom is referred to as an exited state and the atom do not remains in this extra energy condition for long time. The time that they remain in an excited state is called the life time of the excited state life time is less than a micro second. At the end of its normal excited life time, the electron will drop back to its previous energy level and the atom returns to its ground state or normal state. In order to return to its normal condition the electron must give up the extra energy it acquired earlier. This is referred to as energy emission.

To explain the black body spectrum for all wave lengths in 1900, the German physicist max. Planck’s proposed a formula, which relates the amount of energy E and frequency f in such a way that the higher the frequency the more energy will be in packet/bundle that is to be emitted. Mathematically Planck’s formula is

Since we know that

Calculate the energy of photon that has a wavelength of 400nm. Do the same calculation for a 700nm photon.

Now formula to be used is