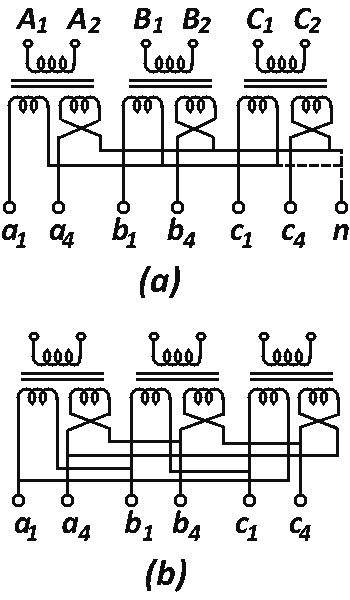 Three single phase two winding transformers can supply a six-phase load such as synchronous converter as shown in Fig. 2. Such connection is known as diametral. Three separate single phase low voltage distribution network can also be supplied form this connection. The secondaries are generally provided with mid-point tailings which can be connected with each other to form the earth connection. Six phase supply is used in six phase machines such as six ring synchronous converter or a six-anode rectifier. Cooling Of Transformer

Since there are no rotating parts which induce ventilating draught, transformers are more difficult to cool than rotating electrical machines.

For small transformers up to 20kVA, the external surface is sufficient to dissipate the heat by radiation. In large transformers additional means are provided for carrying away the heat. Transformers are classified in accordance with the meths d of insulating and cooling as follows:

When transformers become warm, the oil and gas expand. The gas at the top of the oil is expelled. When the transformer cools, air is drawn into the transformer. Hence the transformer breathes. Moisture is drawn in during this process. This moisture is readily absorbed by the oil, and the dielectric properties of the oil are reduced. Moreover, the oxygen in contact with the oil oxidizes it, forming a thick sludge. This sludge adheres to the windings, clogging the oil ducts and sometimes resulting in burn outs. In small transformers up to 2,000 kVA, breathing may be prevented by sealing the core and case with a gasket and the bushings and leads with an insulating compound. In large transformers, this method becomes difficult. Hence an apparatus called breather is installed. Breather contains some dehydrating substances which finishes the chances of formation of explosive mixtures over the oil.