Triode is a vacuum tube with three electrodes which are cathode, Anode and a control grid. The function of additional third electrode is to serve as an electrostatic screen which shield the cathode from the electrostatic field of anode triode are used for amplification of weak AC signals of frequency ranging from 0 to 100 MHz. 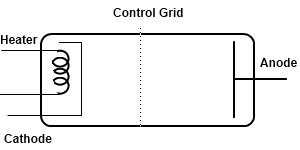 WHY WE MAKE GRID BIAS NEGATIVE

The characteristic curves are used to determine the performance of a tube under any operating condition.

The characteristics can be obtained by using the circuit as shown in Figure (a). First let us adjust the grid voltage at zero volts. Now plate voltage increased in steps and the corresponding values of plate current are noted at each step. If we draw a graph between plate voltage and plate current, then a curve is obtain at VG = O. Similarly obtain curve at VG = —2, —4V, —6V,—8V and so on.

Curve in Figure (b) showing the variation in plate current for changes in plate voltage with different grid voltages. It is called plate characteristic curves. VG represents grid voltage.

As Vp and Vg are changed in opposite direction to keep Ip constant, therefore the ratio ∆Vp/∆Vg is negative sign appearing in the formula for µ to make this ratio positive.

Relation between rp, m and gm

As we know that: