DIAC is two terminal four layer semiconductor device (Thyristors) that can conduct current in either direction, when polarity is active. The basic construction and symbol of DIAC is shown in above diagram.

The DIAC has four layers (PNPN) and two terminals anode A1 and A2. A light doped    N-Type material is placed at each side of the DIAC. Both the terminals   A1 and A2 are connected at these places as shown in the figure.  The two terminals A1 and A2   are connected across in the DIAC that, when the break over voltage is reached at either terminal, the DIAC start conduction. The characteristics curve is shown in the below Diagram.

TRIAC is a type of Thyristors that can conduct current in both directions when the polarity activated. The TRIAC is like the DIAC with a gate terminal. The TRICA can be ON by a pulse or gate current does not require the forward break over voltage to conduct as does the DIAC, Basically the TRIAC can be a thought of simply two SCR's connected in parallel in opposite directions with a common gate terminal. Unlike the SCR the TRIAC can conduct current in either direction depending on the polarity of voltage across its anode (A1 and A2) terminals. The characteristics curve is shown in the below Diagram. 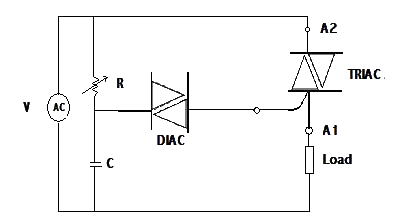 In above figure a simple DIAC TRIAC Power circuit is shown, the working of this circuit is can be explain as during the positive half cycle the capacitor C1 start charging, when the capacitor charged upto Vc, then the DIAC start conduction, when the DIAC turn ON, it gives a pulse to the gate of TRIAC due to which the TRIAC start conduction and current flow through RL.

During the negative half cycle the capacitor charges in reverse polarity. When the capacitor is charged upto VC, then DIAC start conduction and give pulse to the TRIAC. The TRIAC conduct and current is flow through the RL. As we know that the DIAC works in both polarities because it just like the two diodes connected in parallel to each other. Therefore it conducts on both polarities. The out put of the DIAC is given to the gate of the TRIAC, this output use to trigger the gate of the TRIAC, so the TRIAC start conduction and the lamp will be energized.