I = Current in ampere

R = Resistance between the two Pieces

T = Time during which current flow (in seconds)

Types of the resistance welding

There are the following types of the resistance welding. 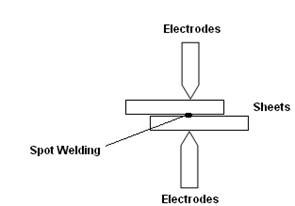 It is done by clamping two or more pieces of metal in the form of sheet. When we weld two sheets, we place these pieces between the two welding electrodes, the electrodes tips are made of copper, the welding current depends on the thickness and the composition of the sheets.

In this welding, one bar is hold in fixed clamp and the other in moving clamp. The two bars are brought together as shown in the figure. The heating (welding) current is produce through the welding transformer to rise the temperature of the job, when the pieces are welded, the hold of the clam is released. This type of welding is used to weld pips, wires and railway tracks. 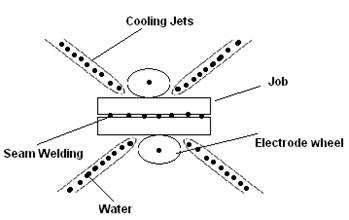 In this type of welding the overlapping sheets of metal are welded either along continuous line by moving the sheets between the two electrodes wheel, through which the welding current flows in short or long intervals. 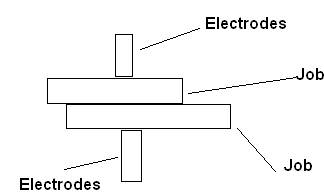 To control the spot welding machine a sequence timer has to measure the time for welding in four steps as shown in the given figure.