The IC temperature Transducer uses a silicon chip as sensing element. They are available in both voltage and current output configuration. The range of IC sensor is limited below from 200C°; they provide very liner change in voltage or current change.

There are some important advantages of the IC transducer over other type of transducers.

It is passive transducer which converts a given strain to a resistance change. In other words it utilize resistance variation of the area to sense the change in strain which produced by the force acting on the wire, It is used for the measurement of weight, Force, Pressure etc. the force applied to the gauge causes band in wire, this bending action also change the physical size of the gauge. The change in size of the gauge produce change in the resistance change, this change is then feed to the bridge circuit which detect the small change in gauge resistance and then feed it to the output device.

The Hall-effect Transducers are sensitive to magnetic field strength. The hall element is a small thin and flat slab of semiconductor material. When a current is passed through this slab and no magnetic field is present, zero output voltage is produced, when a magnetic field is brought near to the semiconductor of hall effect transducer, the current path is disturbed (Destroyed), this Distortion is causes the electron to flow through the right side of the material, which produce voltage across the device as shown in the figure.

The hall–effect transducer is used for the measurement of speed, RPM etc, of different motors and generators. 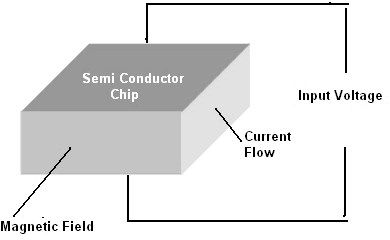 The thermo couple Transducer consist on two dissimilar metal wires jointed at one end as shown in the given diagram, the end “A” is known as “sensing junction”, the other end known as “Cold” or “Reference” junction because it is kept at a low but a constant temperature (Reference Temperature) When end “A” is heated an e.m.f called thermo electric e.m.f in the Milli volt is produce between sensing junction”, and “Reference junction”. The magnitude of this e.m.f depends on the temperature difference between the hot and cold junctions and the type of wire material used, the thermocouples are made from a number of different materials covering a wide range of temperature from -270C° to 2700C°. 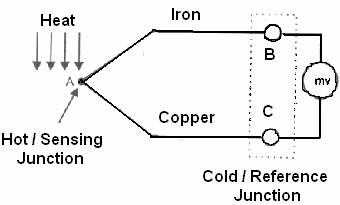 They are available in simple wire from or in insulated wire form.

There are some uses of the thermocouple transducers.

The production of Electric potential difference by means of mechanical pressure, this is called piezo electric phenomena. It is consist of crystal of ceramic such as barium titanate. 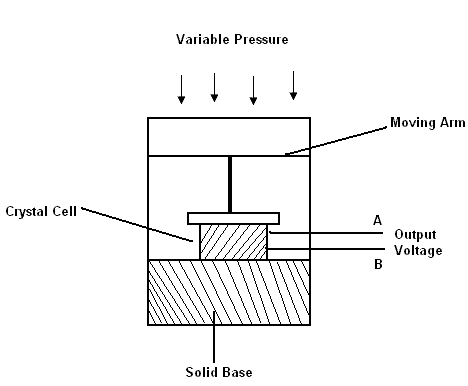 In above figure the crystal is pleased between a solid base and force sensing arm. When pressure is increased on the top surface of the crystal a potential difference is developed across its opposite ends which are connected to the out put terminals. The output voltage found is directly proportional to the magnitude of the pressure. The potential difference develops in opposite polarity. If we apply a suitable AC voltage across the terminals of the crystal it starts vibration with its natural frequency which is very stable. The main disadvantage of this transducer is that it cannot measure the static pressure.

Photoconductive cell is also called a photo resistive device. It is based on the principle that the resistance of the certain semiconductor material decreases when they are exposed to light, in other words such material have high dark resistance.