Optical rays are the single line or narrow beam of light from a small or distant source.

The behavior of light is easier some time by using ray tracings than by using the EMT. For behaviors of light some time photon theory is also used.

The EMT is used when there is discussion of wavelength and frequency. Using optical rays the explanation of reflection and refraction are much easier propagation of light in fiber also explained in terms of rays. The photon theory is used largely in explaining and analyzing the light generation and detection.

The phenomenon related to the bouncing back of light at boundary of two media is called reflection.

Its best example is reflection from mirror.

The Fermat’s principle is that “the ray will travel a path, requiring the least amount of time” a direct result of this law is the fact that if θ1 is 90o, θ2 is 90o then reflected ray is in line with the incident ray,

By using this principle we can easily derive the law of reflection and also of refraction.

The phenomenon related to the bending of light when it passes or enters from one medium to another is called refraction.

When a ray travels across a boundary between two materials with different refractive indexes n1 and n2, so both the refraction and reflection takes place, as shown below

Clearly the shown figure reveals that n1 > n2, where the light travels from high to low refractive index materials and so bends away from normal.

The refracted ray is that ray which is continuous in the same basic direction as incident ray but slightly bended/braked. So the θ1 is not equal to θ3

Remember that the two materials involved are transparent and allow light propagation.

Note: when both reflection take place than the amount of light reflective depends on the angle of incident angle (similar than about 30o) the reflected light amount is less than 5% of incident light amount.

When a ray incident on the interface between high and low reflective index materials is totally reflected rather than refracted than it is called total internal reflection.

Using Snell’s law we have

Now this angle of incident θ1 for which refracted angle θ2 = 90o is called the critical angle θc. Thus (1) can be written as

The process that causes an electromagnetic wave to bend as it passes by a sharp edge (edge of razor blade) obstructing the wave is called diffraction.

Simply we can say that diffraction causes the light ray to deviate from a straight line. This occurs only when a light wave front is blocked by sharp edge of the object.

The θ which is the angle of diffraction depends on the wave length λ of the incident light. The result of this relationship between θ and λ is that the diffracted light is dispersed much like light refracted through a prism, giving rise to the rainbow effect as shown in figure.

The diffraction also takes place when a light passes through a narrow slit or a small hole (relative to wavelength) with well defined edges. The diffraction through slits is used in constructing diffraction grating to obtain more efficient diffraction.

It is a set of opaque or reflective slits (about the size of λ) spaced at constant distance (S), shown as: 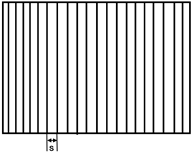 The above shown figure is simple version of diffraction grating. The distance between slits is “S” and is constant over whole plate. The “S” is of the order of magnitude of λ. So the light passes through the slits and is directed.

These are two types of the diffraction grating

Transmissive diffraction grating is constructed by scribing thin lines in a dark film coating that covers the transparent material. This process yields a plate with alternating opaque & transparent slits.

Reflective diffraction grating is the slits in above figure are actually reflecting surfaces. The cumulative affect of reflection from all the reflective strips results in a diffracted wave front that travels in general direction back to light source.

The law governing the transmissive diffraction grating can be states as:

“When a monochromatic light (means light of single λ) is incident on the grating at angle θi, than may diffracted wave are produced. The wave proceeding in the direction of incident light is called zero order wave. The other waves of different order (1st, 2nd,3rd etc) are directed at different angles by diagram we have. 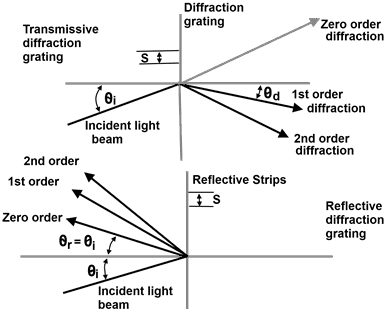