We know that when an atom absorbs extra energy and goes in excited state. To return to its normal or ground state it emits the absorbed extra energy (photon) at an undetermined time. This unpredictable release of photon energy by an atom is called the spontaneous emission. Spontaneous emission occurs at random and the emission of atom has no relationship to any other atom.

By energy level diagram, the spontaneous emission can be shown as: 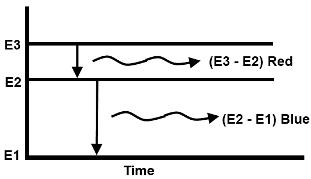 The stimulated emission occurs when a photon with the correct wavelength approaches to an excited atom. If the excited atom has the energy structure such that an electron can drop to the lower level and release an amount of energy equal to the energy or wavelength of incident photon then photon will be emitted from the excited atom. This photon is identical in all respects to the incident photon. Therefore after stimulated emission, the two photons travel in the same direction, have the same wavelength and are coherent.

By energy level diagram, the stimulated emission can be shown as:

From this diagram it is clear that stimulated emission has increased the number of photons.

This is the process of light amplification originally presented by Einstein but not observed in optical wavelengths until Dr. Matiman operated the first laser.