Telephone Exchange is a central place through which one telephone can be connected to any other telephone indirectly. A large number of telephone lines are interconnected with each other through the exchange. An auto telephone exchange contains a number of electromechanical switches, controlled by dialed pulses. The exchange is always located at the centre of population.

In the Strowger type of automatic exchange, there are two alternative methods, on the answering side of the exchange:

There are as many uni selectors as the number of subscribers. The respective fixed contacts of all the uni selectors are connected together. So that all the subscribers have access to each of the available 1st group selectors. 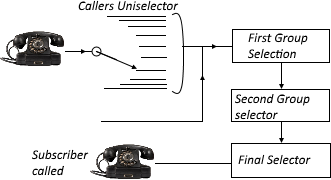 The exchange then sends, a ringing current to the called party and a ringing tone to the calling party, to let him know that the connection has been is shown in the figure, established. The block diagram of the pre-selection type of automatic exchange.
In the pre-selection type of exchange a separate uniselector is used for switching, to connect each subscriber's line to a free group selector. This means that each subscriber has a separate uniselector. In such type of exchanges, if the calling rate is low, then the uni selectors remain idle for most of the time. This situation is improved by placing the switching of the subscriber's line to a free group selector on a common switching basis. In this the subscriber's line is connected to the switching equipment through a line finder switch.

When the subscriber lifts his handset, the wipers of the line finder starts moving on fixed bank contacts until its wipers reach the bank contact of the calling subscriber. All further switching stages following on the line finder are controlled in a similar manner as that of the step-by-step exchange.

The merits of an automatic telephone exchanges given below:

The demerits of an auto telephone exchange are given below: