The wireless transmission path may be of two types:

When electrons move, they create electromagnetic waves that can propagate through space. By attaching antenna of the appropriate size to an electrical circuit, the electromagnetic waves can be broadcast efficiently and received by a receiver some distance away. The radio, microwave, infrared, and visible light portions of the electromagnetic spectrum can all be used to transmit information. Information can be sent by modulating the amplitude, frequency or phase of the waves.

At HF bands, the ground waves tend to be absorbed by the earth. The waves that reach ionosphere (100-500 km above earth surface), are refracted and sent back to earth.

By playing with the antenna (tilting and changing the height), coverage area can be controlled.

We are interested in propagation characteristics and models for waves with frequency in range: few MHz to a few GHz

Modeling radio channel is important for:

Transmission path between sender and receiver could be

Even speed of motion affects the fading characteristics of the channel.

The physical mechanisms that govern radio propagation are complex and diverse, but generally attributed to the following three factors 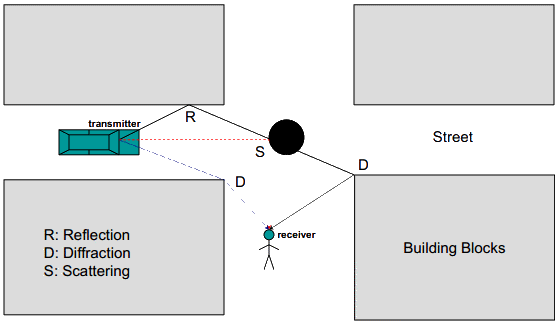 As a mobile moves through a coverage area, these 3 mechanisms have an impact on the instantaneous received signal strength.

As the mobile moves over small distances, the instantaneous received signal will fluctuate rapidly giving rise to small-scale fading.

As the mobile moves away from the transmitter over larger distances, the local average received signal will gradually decrease. This is called large-scale path loss.

What is Decibel (dB)

A logarithmic unit that is used to describe a ratio.

For power differences, dBm is used to denote a power level with respect to 1mW as the reference power level.

Let say Tx power of a system is 100W. What is the Tx power in unit of dBm?

For power differences, dBW is used to denote a power level with respect to 1W as the reference power level.

Let say Tx power of a system is 100W. What is the Tx power in unit of dBW?