With reference to an electrical system, noise may be defined as any unwanted form of energy which tends to interfere with proper reception and reproduction of wanted signal.

Noise is random, undesirable electrical energy that enters the communications system via the communicating medium and interferes with the transmitted message. However, some noise is also produced in the receiver.

Noise may be put into following two categories.

Atmospheric noise or static is caused by lighting discharges in thunderstorms and other natural electrical disturbances occurring in the atmosphere. These electrical impulses are random in nature. Hence the energy is spread over the complete frequency spectrum used for radio communication.

Atmospheric noise accordingly consists of spurious radio signals with components spread over a wide frequency range. These spurious radio waves constituting the noise get propagated over the earth in the same fashion as the desired radio waves of the same frequency. Accordingly at a given receiving point, the receiving antenna picks up not only the signal but also the static from all the thunderstorms, local or remote.

Electrons and "ions" strongly bound by molecular forces. The ions vibrate randomly about their normal (average) positions, however, this vibration being a function of the temperature. Continuous collisions between the electrons and the vibrating ions take place. Thus there is a continuous transfer of energy between the ions and electrons. This is the source of resistance in a conductor. The movement of free electrons constitutes a current which is purely random in nature and over a long time averages zero. There is a random motion of the electrons which give rise to noise voltage called thermal noise.

Thus noise generated in any resistance due to random motion of electrons is called thermal noise or white or Johnson noise.

The analysis of thermal noise is based on the Kinetic theory. It shows that the temperature of particles is a way of expressing its internal kinetic energy. Thus "Temperature" of a body can be said to be equivalent to the statistical rms value of the velocity of motion of the particles in the body. At -273°C (or zero degree Kelvin) the kinetic energy of the particles of a body becomes zero .Thus we can relate the noise power generated by a resistor to be proportional to its absolute temperature. Noise power is also proportional to the bandwidth over which it is measured. From the above discussion we can write down.

From equation (1), an equivalent circuit can be drawn as shown in below figure 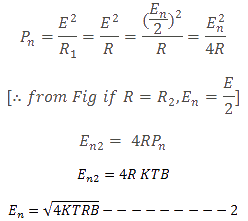 From equation (2), we see that the square of the rms noise voltage is proportional to the absolute temperature of le resistor, the value of the resistor, and the bandwidth over which it is measured. En is quite independent of the Frequency.

R.F. amplifier is saving an input resistor of 8Kr and works in the frequency range of 12 to 15.5 MHz Calculate the rms noise voltage at the input to this amplifier at an ambient temperature of 17oC?

Another kind of noise that occurs in transistors is called transit time noise.

Transit time is (he duration of time that it takes for a current carrier such as a hole or current to move from the input to the output.

The devices themselves are very tiny, so the distances involved are minimal. Yet the time it takes for the current carriers to move even a short distance is finite. At low frequencies this time is negligible. But when the frequency of operation is high and the signal being processed is the magnitude as the transit time, then problem can occur. The transit time shows up as a kind of random noise within the device, and this    is directly proportional to the frequency of operation.

Within the transistor, thermal noise is caused by the emitter, base and collector internal resistances. Out of these three regions, the base region contributes maximum thermal noise.

Partition noise occurs whenever current has to divide between two or more paths, and results from the random fluctuations in the division. It would be expected, therefore, that a diode would be less noisy than a transistor (all other factors being equal) If the third electrode draws current (i.e.., the base current). It is for this reason that the inputs of microwave receivers are often taken directly to diode mixers.

A receiver has an input signal power of l.2µW. The noise power is 0.80µW. The signal to noise ratio is

The device under consideration can be the entire receiver or a single amplifier stage. The noise figure F also called the noise factor can be computed with the expression

You can express the noise figure as a number, more often you will see it expressed in decibels.Signal to Noise Ratio image widget