A fiber made of a core and cladding with two reflective indices near and clad is called step index.

The ray propagation in the fiber must be launched into the fiber at one end. The conditions necessary to inject such rays efficiently depends on the fiber structure and characteristic of light.

The propagation of light energy in optical fiber takes place at different angles of propagation called modes of propagation. Since all rays with the angles less than θC , propagate in fiber. So on basis of the electromagnetic theory these rays propagate at distinct angles, shown as:

Note that if critical ray is propagating at 11.7o then other rays will propagate at distinct angles below the 11.7o.

Here three rays (ray1, ray2 and ray3) propagating at distinct angles θ1 , θ2 and θ3 respectively. These rays are referred to as modes of propagation.

The transfer of light energy from one mode to another mode is called mode conversion or mode coupling. The mode coupling is caused by fiber bends (macro bands and microbands).

Above figure shows two rays (solid and dotted lines) passing through macro band in fiber. When solid line ray of angle θi reaches to point A, than its propagation angle becomes larger than θi. Here we assume that this angle is larger than θC (critical angle). So the ray exits the fiber. Now the θi mode has been converted to a leaky mode (very high order mode) and thus lost.

Similarly the mode propagation at angle θ2 is converted to a higher order mode θ/2 due to band and here θ/2 > θ2. Mode conversion to both the higher order and lower order modes usually takes place.

Here above figure shows the mode conversion caused by a small indentation in fiber known as micro bend. Bothe conversions that in from lower order to high order & from higher order to low order mode is clearly shown by figure.

Thus as a summary we can say that when the light energy propagates in high order modes (mostly low order modes or particular mix of modes than it depends on launch conditions (i.e. then angle of incident of ray entering the fiber end) and so the mode coupling takes place.

The amount of energy carried by each mode in an optical fiber, usually given in relative terms is called mode distribution.

The mode distribution, because here the power carried by each mode does not change any more.

This means that distribution of light energy among the modes is relatively constant from these on each mode is carrying its fair share light.

Noted that the mode coupling continuous through out the fiber but mode distribution remains relatively unchanged.

It is sometimes desirable to set up the steady state mode distribution over a short fiber length by introducing minute band in fiber.

The meridional wave or rays are those which pass through the fiber center line. Normally all the rays have been assumed to be meridional.

But in reality a large number of rays travel through fiber without going trough the fiber center line. Thus that ray which propagates in the fiber without crossing the fiber center line is called skew waves or skew rays. The skew waves / rays represent a significant part of the total light transmission. The skew waves are a result of the way the light is injected into fiber and it is nearly impossible and also unnecessary to avoid them. Skew rays are also called spiral rays.

Here the entering rays shown in fiber are two, one is solid line rays and the other is dotted line ray.

For solid line ray, at point A the refraction takes place and so ray is slightly bends. Thus θa is not equal to θC . Hence the refraction indices involved are of air nair = 1 and of core n1

Similar idea utilizes in dotted line ray propagation also. Thus only those rays are accepted by fiber which enters the fiber edges with in the angle 2θa. This angle 2θa is called the acceptance angle.

The 2θa angle in three dimension is called an acceptance cone, which is limited by the angle 2θa . The cone is formed by rotating the acceptance angle with the fiber line as axis. 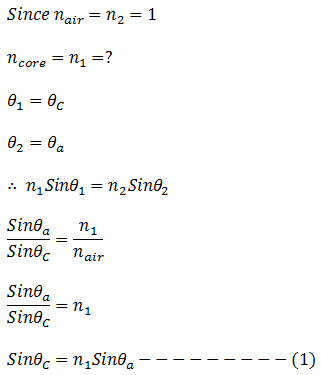 Here the term “Sinθa “is called the numerical aperture (NA) and can be defined as: “ The Sine of one half of the acceptance angle is called N-Aperture”. So from (1) we can write mathematical relationship between N.A & θa as:

From the eq. (2) it is clear that a large N.A represents a large acceptance angle & vice versa. 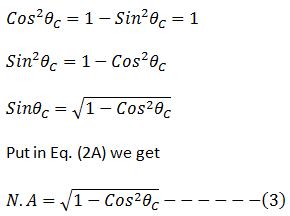 Since the relation between refractive indices & critical angles is 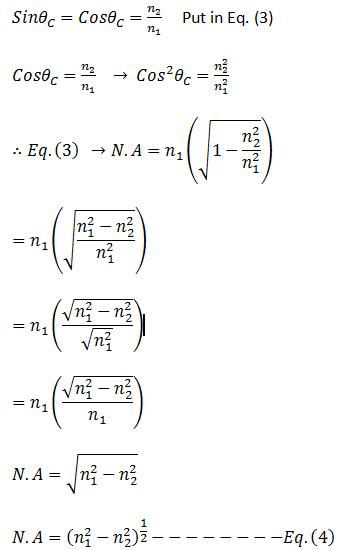 From Eq. (2) we can easily derive Eq. for half acceptance angle. i.e.

The relative refractive index difference is denoted by ∆, which is defined as: 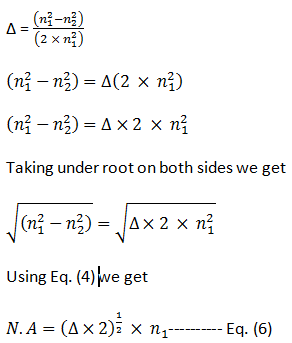 The range of the wave lengths between the two points of half power emission of a light source is called line width.

In other words, the line width of light energy and of a light source is the width in wave lengths between two points where the light energy drops off to one half of its maximum power.

The line width is denoted by ∆. And ∆λ corresponds to the band width ∆f. For narrow line widths, ∆f can be expressed as:

From Eq. (1a) we can say that the bandwidth is the product of relative line width (∆λ / λo ) and the center frequency.

Note that: a line width of the source has serious effect on overall performance of fiber optics transmission system. A large line width a large number of modes for the same N.A & lower the maximum data rate of system.

This block is broken or missing. You may be missing content or you might need to enable the original module.