The transistor is used to amplify the weak signal a CE amplifier connection is shown in below figure. 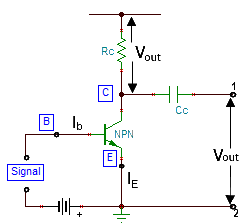 The output from CE amplifier is either taken across the resistance RC or at the terminal 1 and 2. In both cases the magnitude of the output signal is same. Since

This method is used in amplifiers having single stage amplification only.

Since VCC is the D.C Voltage, it cannot pass across the coupling capacitor Cc. only varying output appears across the output terminals. Therefore

Thus output is same in magnitude, but negative sign indicates the phase reversal. This method is used in multistage amplifier circuits.

As an amplifier, CE connected transistor can be represented as a 2 port network.

When a small change of base emitter voltage (∆ VBE) is applied. It results in change in base current as ∆ IB at constant collector emitter voltage, then there ratio is called input resistance Ri.

So when 1 V is applied and if the base current is 2 mA, then the input resistance of the transistor amplifier will be

This value is very high due to reverse biasing of collector base PN junction.

It is load offered to the A.C collector current. In case of single amplifiers, it is parallel combination of RC and RO.

Since, RO is the output resistance and it is large, so

Hence in a single stage amplifier, the effective load is equal to collector load RC.

In case of multistage amplifier, the input of next stage is connected to the output of first stage. So the effective output resistance will now be:

Since RO is very much larger than Ri. Now the effective load resistance will be:

Thus the effective load resistance is decreased corresponding to the value of Ri.

Is the ratio of change in collector current ∆IC to the change in the base current.

For single stage Ra = RC and for multistage: