A CRT is an electronic tube designed to display electrical data. 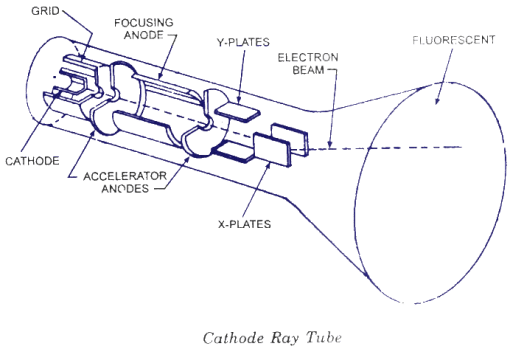 It is used for producing a strain of electrons

These are used for producing a narrow and sharply focus beam of electrons.

These are used for controlling the path of the beam.

With a phosphorecent screen which produces bright spot when struct by a high velocity electron beam.

The electron gun assembly consists of an indirectly heated cathode (K), a control grid (G), an accelerated anode A1, focussing anode A2 and accelerating anode A3

Two pairs of deflection plates provided in the CRT these deflection plates are mounted at right angle to each other to provide electron beam deflection along vertical and horizontal axis of the screen. The screen consists of a glass which is coated by some florescent material lie zinc silicate. Which is semitransparant phosphor substance. When high velocity electron beam structs the phosphorescent screen the light emitts from it. The property of phosphor to emitt light when its atoms are excited is called fluorescence.