A type of diode that emits light when there is forward current. The back operation of the LED is as follow.

Various impurities are added during the doping process to establish the wavelength of the emitted light. Symbol of LED is shown below.

LED’s are made of Gallium arsenide (GaAs), Gallium Arsenide Phosphate (GaAsp) or Gallium Phosphate (Gap). Silicon and germanium are not used because they are essentially heat producing materials and are very poor at producing light.

The forward voltage across an LED is considerably greater than for a silicon diode. Typically the maximum (Vf) forward voltage for LED’s is between 1.2 volt and 3.2 volt, depending on the device. The LED emits light and response to a sufficient forward current as shown in figure below. 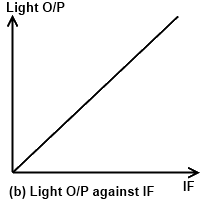 The amount of light is directly proportional to the forward current.