FET stands for "Field Effect Transistor" it is a three terminal uni polar solid state device in which current is control by an electric field. 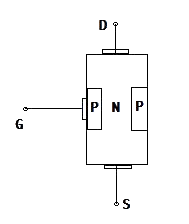 FET can be fabricated with either N- Channel or P- Channel, for the fabrication of N-Channel JFET first a narrow bar of N-type of semiconductor material is taken and then two P-Type junction are defused on opposite sides of it's middle part, called channel. The two regions are internally connected to each other with a signal lead, which is called Gate terminal. One lead is called Source terminal and the other is called Drain terminal.Construction of FET

P-Channel JFET is similarly is constructed except that it use P- type of bar and two N- types of junctions.

It is the terminal through which majority carriers are entered in the bar, so it is called Source.

It is the terminal through which the majority carriers leads the bar, so it is called the drain terminal.

These are two terminals which are internally connected with each other and heavily  doped regions which form two PN-Junctions. 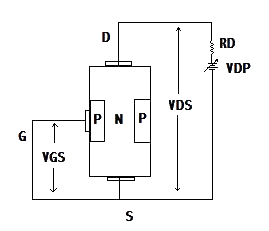 the current ID increases as VDS is increased from zero on ward. This relation ship between VDS and ID continuous till VDS reaches certain value called "Pinch OFF" VPO.

When VDS is equal to zero and VGS is decreased from zero, the gate reverse bias increases the thinks of the region, as the negative value of the VGS is increase a stage cones when the two dip lections regions touch each other, in this conduction the channel is said to be Cut OFF.

One of the application of the JFET is an Amplifier, it amplified the weak signal connected in the Gate terminal , the input is always reversed biased, a small change in the reverse bias on the gate produce large change in the drain current, this fact make JFET capable of amplifing  the weak signals

The MOSFET is sub divided in to two types,

This MOSFET could be operating in both duplication and Enhancement mode. By Changing the Polarity o VGS, when VGS is negative for the N-Channel DE- MOSFET is operate in depletion mode, however with positive gate voltage it operates in an Enhancement mode.

This MOSFET Operates in the only Enhancement mode. It differs only in construction from the DE- MOSFET in that there exists no channel between the drain and source. 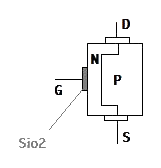 Like JFET it has source, Gate and Drain, However its gate is insulated from its conduction channel by an ultra thin metal oxide. Insulating film usually silicon dioxides (SiO2), because of this insulating property MOSFET is also known as Insulated Gate Field Effect Transistor (IGFET). In DE-MOSFET we can apply both the positive and negative voltages at gate terminal because the gate terminal is isolated from the channel. 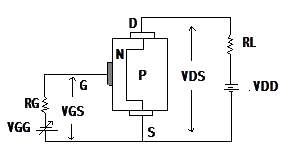 When VGS=0 electrons can flow freely from source to drain through the conduction channel, When a negative voltage is applied at gate terminal, it depletes the N- channel and its electrons by inducing positive charges in it. Grater negative voltage on the gate, grater is the reduction in the number of electrons in the channel which increase the conduction. In fact too much negative gate voltage cut off the channel, thus with negative gate voltage a DE-MOSFET behaves like a JFET, for this reason negative gate operation of DE-MOSFET is called Depletion mode Operation. 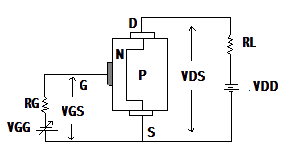 As positive gate voltage increases the number of induced electrons is increased which increase the conductivity of channel from source to drain, this way the current is also increased. The positive gate operation of the DE-MOSFET is known as enhancement mode.