The SCR stand for Silicon Controlled Rectifier, it is used in industries because it can handle high values of current and voltage. 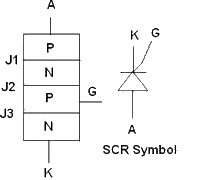 The Silicon Control Rectifier SCR is consist on four layer of semiconductor which forms PNPN or NPNP structure, it has tree junction J1

The Silicon Control Rectifier SCR start conduction when it is forward biased. For this purpose the cathode is kept at negative and anode at positive. When positive clock pulse is applied at the gate the SCR turns ON.

There are two methods through which Silicon Control Rectifier SCR can be turned OFF, 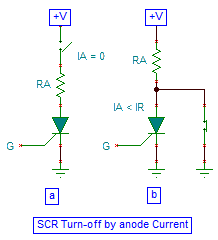 In this method a parallel or a series switch is used to turn OFF the Silicon Control Rectifier (SCR electronics) by turning OFF the switch. 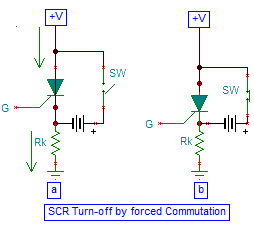 In this method a reversed polarity battery is connected, so the current through the Silicon Control Rectifier SCR is reduced and it turn OFF.

In the Given ckt a Single phase controlled Rectifier is shown. which is used to control the DC motor speed. This ckt is consisting of four SCR and four Diodes. The DC voltage is supplied to the motor winding through four diodes while the DC voltage supplies to the armature through four Diodes.

In This ckt the motor is controlled through armature voltage, while the field voltage is at a constant value.

In the ckt the SCR 1 & SCR 4 are triggered at same time in first cycle, while in next half cycle SCR 2 & SCR 3 are conduct.

The motor armature receives a continuous or Discontinuous voltage depends on the firing angle of the SCR, Power factor.

In Discontinuous armature current , SCR 1 & SCR 4 are fire at angle a due to which the current flow path is form a to ß , as shown in the Fig:

The motor armature receives voltages form a to ß, while form ß to p + a the motor can't receive current.

Through this way the speed of a DC motor is controlled. 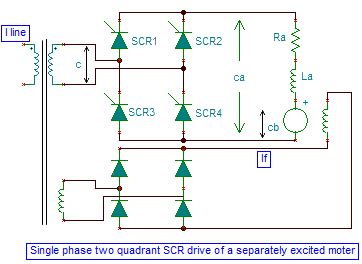 The frequency method is very important through which the speed of the induction motor is controlled.

In the frequency controlled method, the three phase supply is controlled through a controlled rectifier. The voltage is applied on the forced Commutated Bridge rectifier, which produce a variable frequency for control of the induction motor.

There are the following applications of the SCR in Electronics.