The output characteristics of the two are different while the construction and function of all solid state lasers is same.

The term Continuous wave or CW normally indicates that a laser has continuous output. Usually in CW case of laser is continuously pumped.

There are very few solid state crystals that can produce laser light and resist the extreme heat generated by a CW pumping source. Only common laser of this type is the ND: YAG. Output wave of the Nd: YAG laser is 1.06 microns which is in the near infrared spectrum. The beam diameter varies from 0.75mm to 6mm while beam profile can e either TEM0,0 or multimode. The TEM0,0 beams tend to have narrower beam diameters.

Importantly not that the beam divergence from a solid state laser is not constant. As the laser rod gets heated by the light source during pumping, thermal expansion occurs. This causes the rod to act as a lens and expand beam. So during use when the rod gets hotter than the rod expands even more and so causing greater divergence.

The beam divergence for the CW solid state laser can be as low as 1 milli radian for TEM0,0 mode lasers are as high as 20 milli radians fro multimode lasers.

The output power for the CW solid state laser varies from a low of 0.4 watt to a high of 600watts.

Since a Q-switch can be inserted between the laser mirrors, therefore a very rapidly pulsed output can be obtained. In addition the CW pumped solid state lasers can be mode locked for the production of ultra short pulses.

In fact these lasers can produce a CW, modulated CW, Q-switched or mode locked output.

The pulsed solid state laser produces a pulsed output due to the pulsing of the input energy. In pulsed lasers the material used can be cooled between pulses therefore the active medium does not exposed to the extreme temperature rise, experienced by a CW laser. That is why there are more choices of active media for pulsed laser rather than for CW solid state lasers.

When Nd:YAG is used as a active medium then it can pulsed very rapidly because it can even with stand the extreme thermal loads of CW operation. It is very common to pulse YAG lasers a rate of up to 200 pulses per second. However if ruby or Nd: glass is used as the active medium then pulse rates are limited to 2 or 3 pulses per second. The additional time between pulses is needed to cool the crystal to prevent fracturing.

The Nd: YAG and ND: glass put out the wavelengths in the near infrared spectrum, i.e. 1604 and 1600nm respectively. Ruby laser emits a visible beam at 694nm (lightly red)

Beam diameter of pulsed laser is in 5 to 10mm range. Beam divergence ranges from 1 milli radian to 10 milli radian. Power output from pulsed laser averages about 400watts although the peak power of individual pulse is much higher.

The typical solid state laser construction can be shown as:

Usually all solid state lasers have similar design. A laser rod is mounted near an arc or flash lamp. The lamp is connected to DC power supply that maintains a controlled current through lamp. The laser rod and lamp are placed parallel to each other and are surrounded by a reflector. The high reflective (HR) mirror and the output coupler are placed at either ends of the laser cavity.

For simplicity we do not show the DC power supply and cooling system, however they exists in solid state lasers.

By energy level diagram the function of solid state say Nd: YAG laser can be shown as: 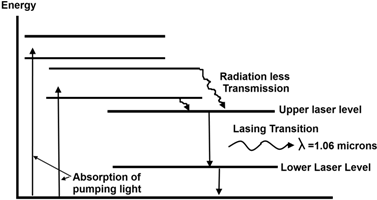 The solid state lasers have the following advantages over other types of lasers.

The active medium in solid state lasers can be one of different crystals. These crystals are not found in nature but rather they are produced commercially such as Ruby, Nd: YAG (Neodymium: Yttrium, Aluminum garnet), Nd: glass (Neodymium: glass), erbium etc.

The crystals used in the lasers are made by doping a highly transparent host material with a metal that will lase. For example YAG host material that has been heated and is in melton form can be doped with Nd. When the mixture cools, a crystal begins to form. A cylindrical crystal is then carefully drawn from the melton material when it continues to cool. This process is called growing a crystal.

Once the crystal is completely grown then ends of the cylinder are polished to perfection. The final result is a Nd: YAG rod, that is used as an active medium in a solid state laser. Other solid state lasers rods are produced in similar manner.