The torque is defined as the turning or twisting moment of a force about an axis. The torque "T" produced by a force "F" acting on a body moving in a circle of radius "r", (Figure 1) is: Work done by this force in one revolution = Force x distance

In case of induction motor, the power developed = E1I2 CosØ2

The torque developed by the motor at the instant of starting is called starting torque.

From the above equation it is clear that the value of starting torque can be increased by increasing the rotor resistance.

In case of squirrel cage rotor, the resistance of rotor is fixed and small as compared to its reactance. Hence starting torque of such motors are very poor. Such motors are not useful where the motor has to start against heavy loads.

The starting torque can be increased by adding extra resistances in the rotor circuit of slip ring motor at the start. Hence slip ring motors are used where the motor has to start against heavy loads.

The condition for maximum starting torque can be found by differentiating torque equation (4) w.r. to "R2" and making it equal to zero: 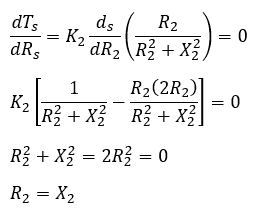 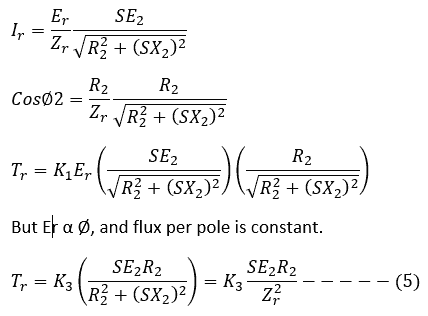 To find the maximum running torque, here also differentiate the above equation w.r. to R2 and make it equal to zero, it results:

The running torque becomes maximum at the value of slip which makes rotor reactance per phase equal to rotor resistance per phase. This slip is called slip at maximum torque and this torque is called maximum or pullout torque or breakdown torque or stalling torque. 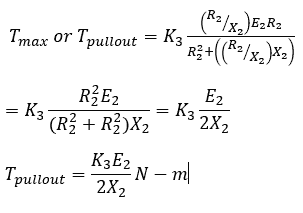 The value of K3 can be proved to be equal to "3 / 2ΔNs ". From the above equation it is found that at "slip", maximum torque can be obtained by varying rotor resistance till it becomes equal to rotor reactance.

RELATION BETWEEN TORQUE AND SLIP

A family of torque/slip curves is shown in fig. 3.17 for a range of S = 0 to S = 1 with rotor resistance as parameter. We have seen that:

At normal speeds, close to synchronism, the term "SX2" is small and hence negligible w.r. to "R2"

Hence for small values of S, the torque/slip curve is approximately a straight line. As slip increases (for increasing load on motor) the torque also increases and becomes maximum when S = R2/X2. This torque, as discussed above is called pullout or maximum torque. As the slip further increases (i.e. motor speed falls) with further increase in motor load, then R2 becomes negligible as compared to SX2. Therefore, for large values of slip: We see that beyond the point of maximum torque, any further increase motor load results in decrease of torque developed by the motor. The result is that motor slows down and eventually stops. Therefore, stable operation of motor lies between the values of S = 0 and that value of "S" which is corresponding to maximum torque.