The effect that causes the output pulse to be wider than the input pulse is called dispersion.

This figure verifies the effect of dispersion. When the signal or pulse of light travels in a fiber than it becomes wider because of various propagation phenomena.

So tp2> tp1due to dispersion

The dispersion is denoted by

Now for a given length of fiber, we can easily calculate the total dispersion by formula. i.e.

The dispersion can be divided into two general categories. i.e.

The dispersion which is caused by the delay between different modes is called inter model dispersion.

It is dispersion between the modes, caused by difference in propagation time for different modes.

Let us consider two extreme modes propagating along the fiber axis shown as:

In figure (a) the critical mode propagating at angle θc and another mode is zero mode because here propagation angle is zero.

A pulse of light lunched into the fiber will propagate along the fiber in both modes.

The difference between shortest delay (td0) and largest delay (tdc) is the time during which pulse energy will arrive at the fiber output, which represents the pulse width at output.

Where n1 = refractive index of core 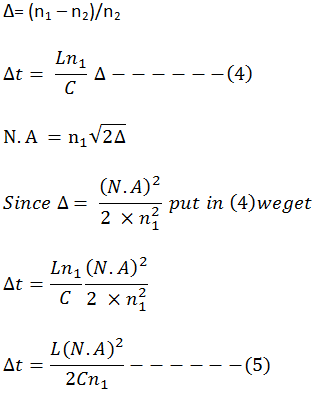 ​​​​​​This is the equation for amount of pulse broadening in terms of N.Aperture

For broadening per unit length of fiber eq. (5) becomes

The dispersion which is independent of modes, related to the line width (∆λ) of the source and caused by variations in the refractive index as a function of wave length is called intra model dispersion.

Since intra model dispersion depends on line width which is related to color. Therefore it is also called chromatic dispersion (color dependent dispersion).

When we increase the line width (∆λ) than it increases the dispersion. Note that this dispersion is given in terms of “Pico second per kilometer per nanometer of line width”.

For a small ∆λ near λ = 1300nm, the shorter and longer wave lengths travel at about the same velocity. This leads to minimal intra model dispersion at λ = 1300nm (or 1.3µm).

From different causes, the total dispersion is found