Diode has a property that is ability to conduct current in only one direction. Due to this property diodes are used in rectifier circuits. As rectification is the process to convert AC signal to Pulsating DC.

Construction of Half wave rectifier

As shown in the given diagram the voltage source is connected to the load resistance through diode. Output voltage Vo is taken across load resistor.

Working of Half wave rectifier 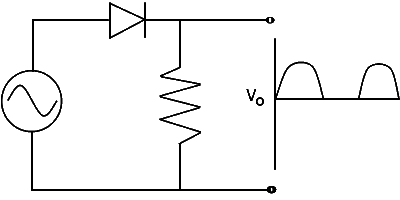 Alternatively during the negative half cycle of the input signal. The diode is reverse biased there is no current flow through the diode during this half cycle. There is no voltage drop across the resistor at the time. The net result is that only the positive half cycle of the AC input voltage appears across the load, making the output a pulsating DC voltage. This process is known as half wave rectification.