Thyristor was invented in 1957 at Bell Labs. They are extensively used as switches, operating from conducting state to non-conducting state. Basically, they are the rectifiers with a control element.

They are four layer or PNPN devices. Thyristor consists of four alternately doped semiconductor layers. They form three functions which are named. J1, J2 and J3.

A thyristor is usually represented by the schematic symbol as shown. This symbol actually resembles to that of a diode but with gate. 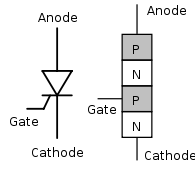 Now it the gate of the equivalent circuit model is momentarily made positive with respect to the cathode, the emitter base junction of NPN (Q2) will become forward biased & it will conduct. This will cause the base current to flow through the PNP (Q1) transistor & it will also conduct.

Calculation for The Anode Current

By the application of Gate current "IG"

Using this value in Eq. 4

The increase in α1 & α2 would further increase IA. Therefore there is a regenerative or positive feedback effect.

If (α1 + α2 ) tends to be unity, the denominator of Eq. 6 approaches zero, resulting in a large value of anode current "IA" & the thyristor will turn on with a small gate current.

How to Turn Thyristor OFF

To turn off the thyristor the anode current must be reduced below the holding level and a relatively long time allowed elapsing for the thyristor to recover its blocking state before a forward voltage can again be applied without conduction.

More typically to turn off the thyristor, the anode current is driven in reverse by external circuitry.

The reverse current flows for a very short duration permitting charges movement within PN layers allowing further reverse current after the storage charge has been removed the central control junction will however not block the reapplication of forward voltage until a further time has elapsed. Typically 10 to 100µs must elapse before the forward voltage can again be applied without breakdown. The charge could be 20µs for a 20A thyristor.

The gate cathode characteristics of thyristors vary in a considerable range within a given production batch. 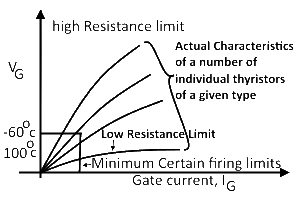 All thyristors can be assumed to have a characteristic curve lying somewhere between high and low resistance limit. The minimum level of current and voltage required to turn on the thyristor is a function of the junction temperature, and indication of these minimum levels is shown.

The current into and voltage at the gate are both subject to maximum values also exceed certain minimum levels. The product of gate voltage and current gives a power level to which a maximum is set.