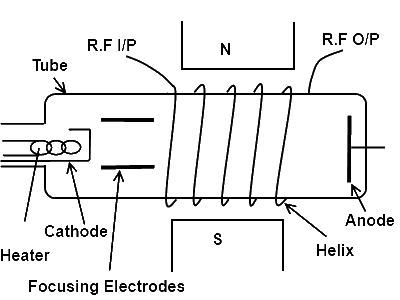 As shown in the figure. The TWT consists of a glass tube or envelope in which heater, cathode, frequency electrons and anode are located. A conducting wire is wrapped around the glass envelope to which I/P and O/P are connected. A permanent magnet is also kept around the envelope over the helix or conducting spring focusing electrodes are used to keep the electrons beam right in the center. The permanent magnet is used to produce the slow speed of electrons. The wire given the shape of spring in order to slow down the speed of electrons emitted from cathode.

When we switch on the circuit the cathode starts the emission of electrons. The focusing electrodes focus these electrons in a narrow beam at the center of tube. These electrons travel toward the anode and if no signal is applied at the helix then the emitted electrons will be collected by the anode without any obstruction.

Therefore, at the output end of the helix, there will be a strong electric field created by the buncher which will result to produce the amplified output signal.
The magnet is used around the helix in order to produce the strong magnetic field which causes the electron beam to remain in the center. The helix is used a slow structure because if from input to output we use a straight wire, then the speed of electrons through the straight will be more w.r.t speed of electrons emitted from cathode hence, no amplification will take place.