Transformer is a magnetic circuit whose name is derived from its ability to transform (i.e. change) the magnitude of an AC voltage applied to it

So we can say that multi-voltages may be included in secondary that depends upon our requirements. For this purpose, a number of secondary windings are used as the secondary. The voltages induced that we want depends upon the number of turns. The current requirement is achieved by the diameter of the coil used. 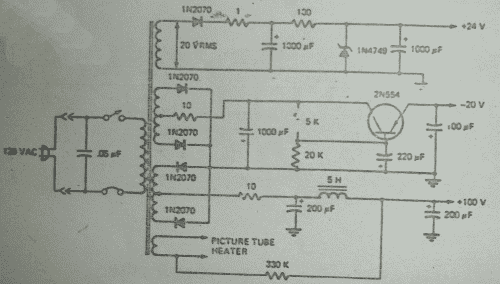 As shown in figure, in the upper winding, 20 Vrms a.c. voltages are induced which are then rectified by a single diode 1N2070. Then a low-pass T-type filter is used for filtration of the rectified output. This rectified and filtered voltages are then regulated by a zener IN4749, hence +24V dc is obtained.