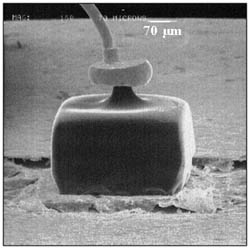 This diode was first introduced by Dr. Leo Esaki in 1958. It is called a tunnel diode because due to its extremely thin depletion layer, electrons are able to tunnel through the potential barrier at relatively low forward bias voltage (less than 0.05 V). such diodes are usually fabricated from germanium, gallium-arsenide (GaAs) and gallium antimonide(GaSb).

The commonly used schematic symbols for the diode are shown in Figure. 1. It should be handled with caution because being a low power device, it can be easily damaged by heat and static electricity.

It is shown in Fig. 2. As seen, forward bias produces immediate conduction i.e. as soon as forward bias is applied, significant current is produced. The current quickly rises to its peak value IP when the applied forward voltage reaches a value VP (point A). When forward voltage is increased further, diode current starts decreasing till it achieves its minimum value called valley current IV corresponding to valley voltage VV (point B). For voltages greater than VV current starts increasing again as in any ordinary junction diode.

Another point worth noting is that this resistance increases as we go from Point A to B because as voltage is increased, current keeps decreasing which means that diode negative resistance keeps increasing.

At zero forward bias, the energy levels of conduction electrons in N-region of the junction are slightly out of alignment with the energy levels of holes in the P-region. As the forward voltage is slightly increased, electron levels start getting aligned with the hole levels on the other side of junction thus permitting some electrons to cross over. This kind of junction crossing is called tunneling.

As voltage is increased to peak voltage (VP), all conduction band electrons in the N-region are able to cross over to the valence band in the P-region because the two bands are exactly aligned.

After VP as the applied voltage is increased, current starts decreasing because the two bands start gradually getting out of alignment. It reaches minimum value (called valley current IV) when the two are totally out of alignment at a forward bias of VV (valley voltage).

For voltages greater than VV , current starts increasing again exactly as it does in the case of an ordinary P-N junction diode.

It may also be found from the following relation RN = - dV/dI.

Its value depends on the semiconductor material used (varying from -10 Ohm to – 200 Ohm).

It is almost as important factor (particularly for computer application) as the negative resistance of the diode.

Silicon diodes have a low IP/IV ratio of 3:1 and their negative resistance can be approximated from RN = - 200/IP. Such diodes are used mainly for switching operating in high ambient temperatures.

Germanium diodes have an IP/IV ratio of 6:1 and their negative resistance formula RN = -120/IP.

GaAs diodes (used exclusively in oscillators) have an IP/IV ratio of about 10:1 and negative resistance nearly equal to that of silicon diodes.

The minimum IP/IV ratio for GaSb diode is about 12:1 and has the lowest resistance of all given by RN = -60/IP. Hence, such diodes have the lowest noise.

The equivalent circuit of tunnel diode is shown in Fig. 3. The capacitance C is the junction diffusion capacitance (1 to 10 pF) and (-RN) is the negative resistance. The inductor LS is due mainly to the terminal leads (0.1 to 4 nH). The resistance RS is due to the leads, ohmic contact and semiconductor materials (1 – 5 ohm). These factors limit the frequency at which the diode may be used. They are also important in determining the switching speed limit.

The tunnel diode has to be biased from some dc source for fixing its Q-point on its characteristic when used as an amplifier or as an oscillator and modulation.

The diode is usually biased in the negative region (Fig. 3 a). In mixer and relaxation oscillator applications, it is biased in the positive resistance region nearest zero (Fig. 3b).

Tunnel diode is commonly used for the following purposes: