The RUBY MASER consist of a ruby crystal kept in the cavity. The cavity is enclosed by a jacket of liquid helium in order to observe the heat generated by the ruby crystal during operation.

For further cooling the jacket of liquied nitrogen is used at the outermost surface of the ruby maser. A pump input is provided to the cavity in order to excite the ruby crystal.

The input and output of microwave frequencyies is given through the divice known as circulator. A permanent magnet is also used across the maser. 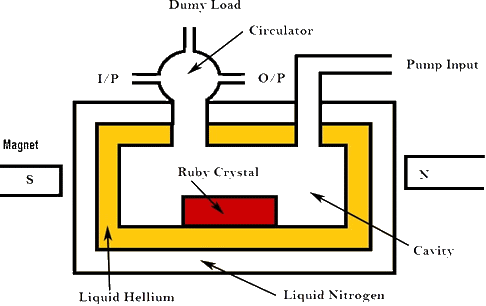 When the high range R.F ainput signal is applied to the cavity through circulator, It finds itself in the high level of signal at the same frequency inside the cavity so the output of this signal is taken from the output port of the circulator in amplified form.

The input and output port between the circulator and cavity is the same. It is possible due to the reason that when the input is maximum at the input port. It is minimum at the cavity port, because the distance between these two ports is λ/4. The same is the case for the output signal.